Strategies and Methodologies of Improving Rice Genotypes in Egypt

Abdallah AA*, Shimaa Badawy A ** and Badawi AT *

The present investigation was carried out at the Experimental Farm of the Rice Research and Training Center (RRTC), Sakha, Kafer EL-Shiekh, Egypt, during the period from 2004 to 2011 rice growing seasons to evaluate some Delta- Med materials under Egyptian conditions and also to develop a new rice lines using a crosses between Egyptian and Spain varieties to enhance the former genotype yielding ability. A total of 14 entries including 7 Egyptian varieties i.e,  Giza 177, Giza 178, Sakha 101, Sakha 102, Sakha103, Sakha 104 and Giza 182 and 7 Spanish ones, namely, Bala, Susan, Bahia, Bomba, Montsianejj , Senia and Tebre. The results showed that there were significant differences between Egyptian varieties and Delta-Med varieties as well as among each group itself. The Egyptian varieties exceeded the Delta-Med entries in grain yield and associated. For Spanish and Delta-Med genotypes, grain yield were generally low, had generally shorter duration and higher 1000 grain weight. Using crosses between Egyptian and Spain varieties to enhance the former genotype yielding ability, these lines, along with a specific breeding program designed for Spain materials, to be evaluated in Spain in the few coming years. The progenies from each cross were advanced under normal conditions using the pedigree method technique. The best selected lines from F6 generation (2010) were promoted to be grown as F7 generation in 2011 season. These lines were found to be resistant to blast disease in addition to possess useful traits associated with high yielding ability. Phenotypic coefficient of variation (PCV) was high for all the character studied and genotypic coefficient of variability (GCV) showed the same trend as for phenotypic coefficient of variability. Heritability estimates were high for all studied traits studied. Highly significant positive phenotypic correlation coefficients were determined between grain yield /plant and all yield a 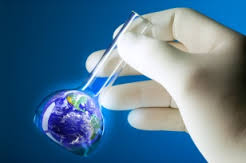